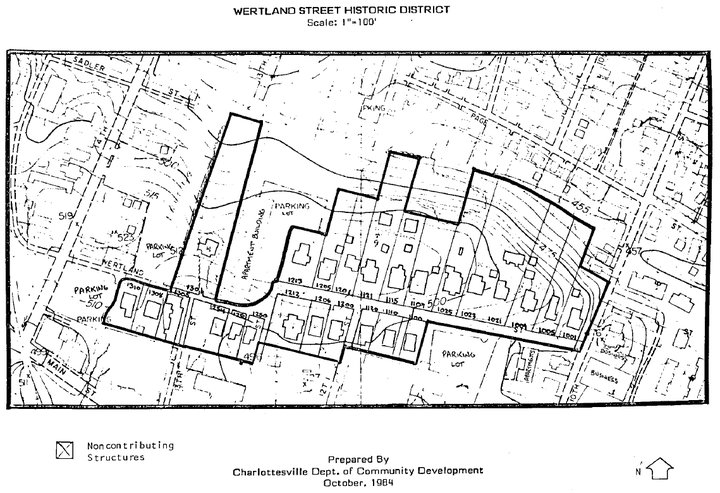 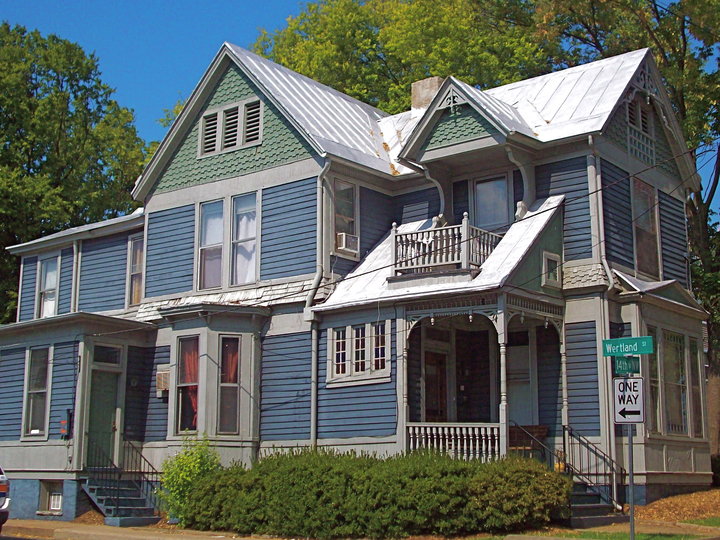 "Comprising an eighty-four-acre area north of Thomas Jefferson's original "academical village" at the University of Virginia, the Rugby Road-University Corner neighborhood contains a broad range of commercial, residential, and institutional structures mirroring the university's development between the 1890s and the Great Depression. Three-quarters of the buildings within the District's bounds exhibit one or more of the various revival styles popular in the late 19th and early 20th centuries.

The District boundaries are by and large determined by obvious man-made or geographic features. University Avenue, which skirts the northern edge of the original campus, forms the District's southern boundary. West of Rugby Road and Carr's Hill the land slopes precipitously toward Emmett Street (U.S. 29), a major commercial corridor. The District encompasses all of Carr's Hill, together with its university buildings and fraternity houses. The District's western boundary is coterminous with Culbreth Road, which wraps around the base of Carr's Hill, returning east to Rugby Road. Then, crossing the Chesapeake and Ohio Railroad tracks at Beta Bridge, the District line turns north and west to encircle Lambeth Stadium, including what remains of its former playing field. The line then continues northwest, wrapping around University Circle, a handsome residential street occupying a ridge of land rimmed with trees that shield it from the modern commercial sector at the base of the hill to the west. Following the rear lot lines of the houses on University Circle, the District boundary crosses Rugby Road and jogs north, following the back property lines of Preston Court, a residential circle containing several fraternity and sorority houses. Continuing south, the District line follows Cabell Avenue and then jogs east to take in the late 19th-century dwellings facing 15th Street. The boundary next turns west to include all lots facing Virginia Avenue, site of several early fraternities and former student boarding houses. The boundary's final stretch veers southeast along the railroad tracks until reaching the C & 0 overpass, which marks the eastern edge of the Corner."

Dovecote at The Corner

The Barringer @ The UVa Medical Center

Lease Begins in June or July